Like Gemini, Lagrange has been designed with minimalism in mind. It depends on a small number of essential libraries. It is written in C and uses SDL for hardware-accelerated graphics. OpenSSL is used for secure communications. 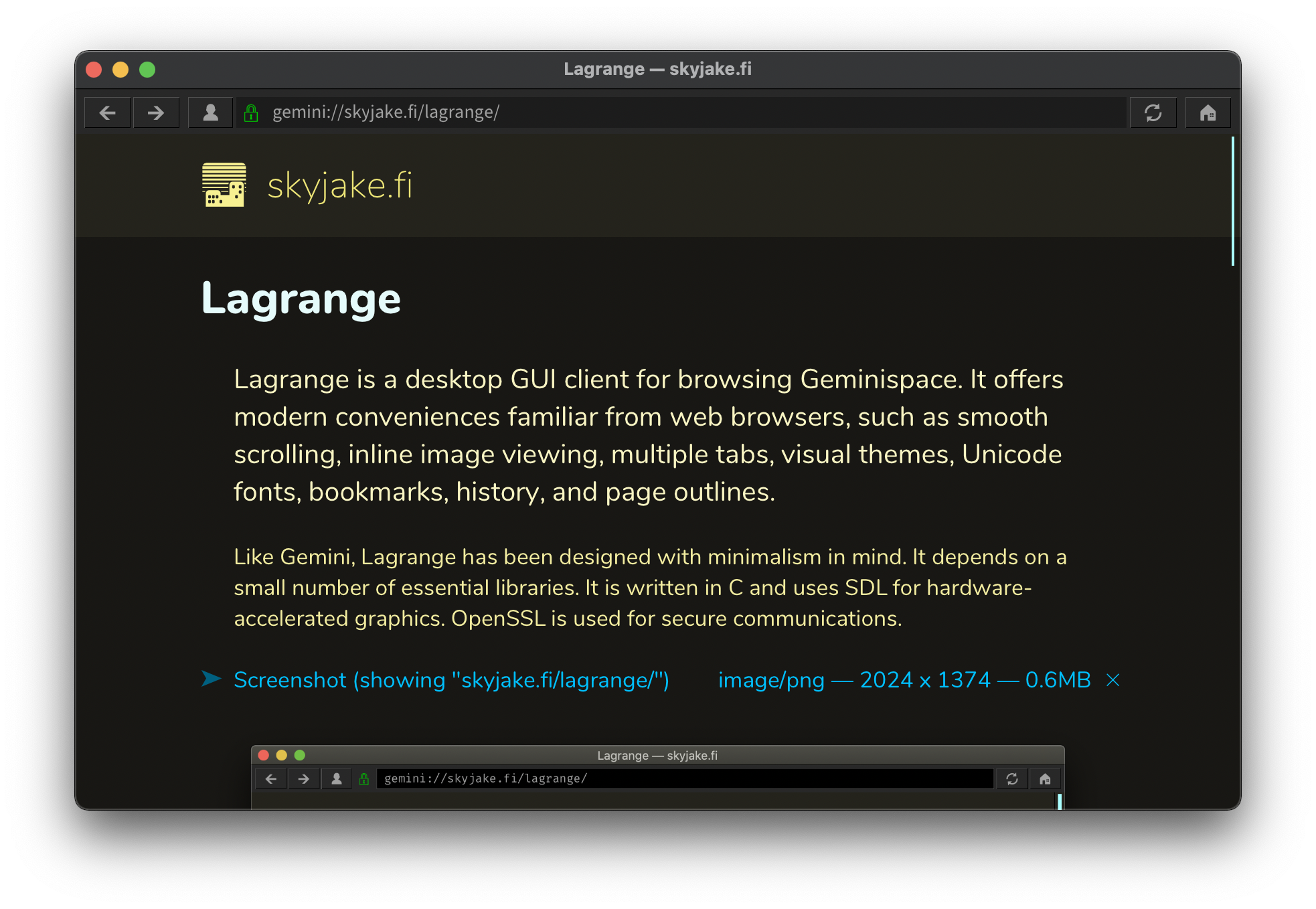 Prebuilt binaries for Windows, macOS (10.13 or later) and Linux can be found in Releases. You can also find Lagrange on Flathub for Linux.

On macOS you can install and upgrade via Homebrew:

Please check MacPorts if you are using macOS 10.12 or older.

You need a POSIX-compatible environment to compile Lagrange.

The required tools are a C11 compiler (e.g., Clang or GCC), CMake, pkg-config, and zip. Additional tools are required for the optional compilation of HarfBuzz and GNU FriBidi (see next section for details).

Note that compiling these libraries has the following requirements:

You also may disable HarfBuzz and/or GNU FriBidi entirely. The old text renderer that only supports non-complex left-to-right scripts is then used.

Installing to a custom directory

By default, the compiled app will be installed to a system-wide location determined by CMake.

Set CMAKE_INSTALL_PREFIX to install to a directory of your choosing:

Note that the install target also deploys an XDG .desktop file for launching the app.

When using OpenSSL 1.1.1 from Homebrew, you must add its pkgconfig path to your PKG_CONFIG_PATH environment variable, for example:

Also, SDL's trackpad scrolling behavior on macOS is not optimal for regular GUI apps because it emulates a physical mouse wheel. This may change in a future release of SDL, but at least in 2.0.14 (and earlier) a small patch is required to allow momentum scrolling to come through as single-pixel mouse wheel events. Note that SDL comes with an Xcode project; use the "Shared Library" target and check that you are doing a Release build.

Windows builds require MSYS2. In theory, Clang or GCC (on MinGW) could be set up natively on Windows for compiling everything, but the_Foundation still lacks Win32 implementations for the Socket and Process classes and these are required by Lagrange. Cygwin is a possible alternative to MSYS2, although Cygwin builds have not been tested.

You should use a version of the SDL 2 library that is compiled for native Windows (i.e., the MSVC variant) instead of the version from MSYS2 or MinGW. You can download a copy of the SDL binaries from libsdl.org. To make configuration easier in your MSYS2 environment, consider writing a custom sdl2.pc file so pkg-config can automatically find the correct version of SDL. Below is an example of what your sdl2.pc might look like:

The -mwindows option is particularly important as that specifies the target is a GUI application. Also note that you are linking directly against the Windows DLL — do not use any prebuilt .lib files if available, as those as specific to MSVC.

pkg-config will find your .pc file if it is on PKG_CONFIG_PATH or you place it in a system-wide pkgconfig directory.

Once you have compiled a working binary under MSYS2, there is still an additional step required to allow running it directly from the Windows shell: the shared libraries from MSYS2 must be found either via PATH or by copying them to the same directory where lagrange.exe is located.

On Raspberry Pi 4/400, you can compile and run Lagrange just like on a regular desktop PC. Accelerated OpenGL graphics should work fine under X11.

On Raspberry Pi 3 or earlier, you should use a version of SDL that is compiled to take advantage of the Broadcom VideoCore OpenGL ES hardware. This provides the best performance when running Lagrange in a console. OpenGL under X11 on Raspberry Pi 2/3 is quite slow/experimental. When running under X11, software rendering is the best choice and the SDL from Raspbian etc. is sufficient.

The following build options are recommended on Raspberry Pi 2/3:

As a prerequisite, you will need to have an iOS toolchain configuration for CMake. CMake is required for Lagrange itself and for the_Foundation. You will also need Autotools helpers for iOS because HarfBuzz, libiconv, libunistring, and libpcre use Automake. Meson and Ninja are used for GNU FriBidi. The iconfigure script in the Autotools helpers needs to be patched.

After these utilities are available, the scripts in ios/ can be used as a basis for the build. Unfortunately there is no ready-made high-level script for performing all these steps, so you'll need to adapt them individually to your needs.

If FriBidi and HarfBuzz are not used (disabling RTL and complex text rendering), the first step can be skipped and the corresponding build steps in ios/deps.sh can be removed. In this case, Meson and Ninja are not needed at all.

On Windows, user files are stored in %HOMEPATH%/AppData/Roaming/fi.skyjake.Lagrange/, unless one is using the portable distribution and there is a userdata/ subdirectory present in the executable directory.

On macOS, user files are stored in ~/Library/Application Support/fi.skyjake.Lagrange/.

On Linux/*BSD/other operating systems, user files stored in ~/.config/lagrange/ unless you have customized the XDG directories, in which case the XDG_CONFIG_HOME environment variable is used to determine where user files saved.

The usage and contents of the user files are described in the Help document. You can delete one or more of the files while Lagrange is not running to reset the corresponding data to the default/empty state.

One instance of Lagrange can be running at a time per user directory.